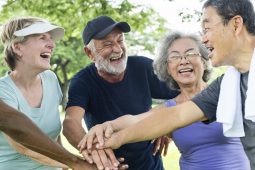 Use it or lose it

My dad is 67, retired and has primary progressive multiple sclerosis. There’s a lot his body no longer allows him to do, many of which I take for granted – things like walking for example. Sure, he has a weakness for chocolate cake and I’m sure some days he binges the latest TV series, but for the things he knows are important, he’s very disciplined. His ‘non-negotiables’ help him stay mentally sharp, physically fit and emotionally healthy. Given his condition and long years of employment, he’d be completely forgiven for taking his foot off the gas, but he hasn’t. He reads more books a year than I could hope to, requests puzzle books and sudoku every Christmas, and ruminates over complex problems posed in the latest edition of the New Scientist. He exercises daily to strengthen the muscles that his body is losing control of and is a volunteer practice patient for trainee doctors. His approach not only works, it’s backed by science too.

The Brain is a Muscle

Well, not exactly, but it certainly behaves like one. The muscles in our body strengthen when they’re used regularly, and they weaken when they’re not. Our brain works in a similar way thanks to neuroplasticity. When we learn something new, think about how to solve a problem, or even play a game on our phone, our brain creates new neural connections and strengthens existing ones which boost our brain power and memory. When we stop using our grey matter however, the opposite happens. Actively engaging our brain can even reduce the cognitive effects of aging. Some activity examples are; studying, reading a book, quilting, playing or learning to play an instrument, completing a crossword or learning a language.

Exercising can make you… smarter?

The list of benefits of exercise (the kind that makes you huff and puff) seems too good to be true. We all know it strengthens the heart, lungs, and body, increases our longevity and reduces the risk of a plethora of illnesses. There’s also a little know fact that exercising can even make us smarter. The extra blood flow to the brain and the release of certain hormones promotes neuroplasticity. This allows our brain to make new brain cells and form neural connections between existing brain cells.

Even with the best intentions and the knowledge of what’s good for us, it can still be incredibly difficult to stick to a new habit. Contrary to popular belief, new habits are rarely formed through sheer will power alone. More than 40% of the actions we take each day aren’t conscious decisions, they’re habits. There are couple of tricks you can use to turn your lifestyle changes into habits. The first is habit stacking-adding a new habit on to something you already do. An example could be stacking reading with your end of day routine of making a cup of tea. After a bit of practice, whenever you make a cup of tea you’ll also read. Another trick is to make good habits easier and bad habits harder. Think of those ‘fork in the road’ moments during your day. Perhaps you could put your running shoes next to the front door and the TV remote in a cupboard or put a sudoku book on your coffee table and switch out the sugary snack bowl for fruit.

While ageing has undeniable effects on the body and brain, there are things we can do about it, and no it doesn’t involve an expensive anti-aging serum. Physical activity can pause, delay and even wind back the effects of aging on our brain and body, no matter your age. Any sort of movement can help. Walking, dancing, even cleaning the house all get our body moving and blood pumping. While you’re at it, why not make the most of the brain building environment and pick up a sudoku, new novel or blow the cobwebs off that old guitar to keep your memory and cognition sharp. Before you know it, you’ll be going for daily walks, speaking a new language and keeping your brain and body fit for many years to come.